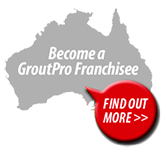 Slate tiles look fantastic as a floor tile however it’s important to seal the surface of slate tiles because being a natural material it is porous. This means dirt and grime will penetrate into the surface which can’t be removed without specialised cleaning equipment. Normal mopping, steam mops and supermarket cleaning products are just not able to remove it.

Assuming your tiler did seal your slate after laying it, the sealer chosen could range from the cheap DIY products available at hardware stores, or it could be a more “professional grade”. The difference between qualities of sealer is durability, adhesion and resistance to discolouration. GroutPro Specialists only use our own GroutPro professional grade sealer which is typically applied in three coats to provide a long lasting glossy appearance and which is easy to clean with conventional mopping.

Our Goonellabah team started work on a job recently which included a 9m² strip of slate tiles into the laundry. The tiles were laid some 33 years ago. The owners had the slate cleaned and resealed just over 2 years earlier by another company who sealed over the top of dirt and stains left behind by their cleaning process. The owners believed there was no way we could restore their slate back to its original beauty, it was so badly marked and stained.

Scott, our team leader in Goonellabah, recommended a major clean involving stripping off the old sealer and had originally hoped to achieve an 85% chance of bringing the tiles back to their original appearance when first laid. Pre-testing the tiles with a number of stripping products Scott found some performed well on the tiles but not on the grout lines which remained dark and stained.

With Scott’s extensive experience in grout and tile cleaning he settled on a commercial grade stripper which he found was effective in the softening and removal of this particular sealing product on both tiles and grout. The key was to allow sufficient time for the application to sit and soak through into the old sealer, then Scott was able to remove all traces of the old sealer and was then able to thoroughly clean the slate tiles and grout in preparation for the new sealer. The result was a near 100% removal of the dirty old sealer and clean of the slate tiles underneath.

Fantastic results for Scott and his team in Goonellabah. If you’re looking at stained slate tiles every day, you’ll want the best service around: GroutPro’s Tile and Grout Cleaning service. Get an Obligation FREE Quote or Call us today 1800 822 459 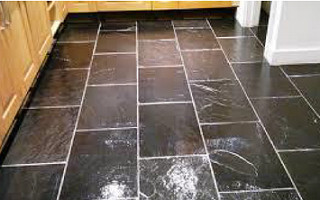 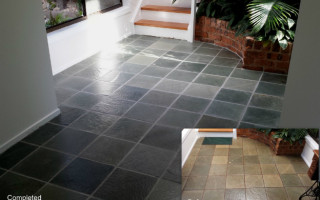 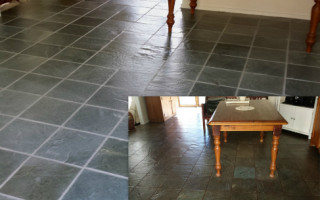 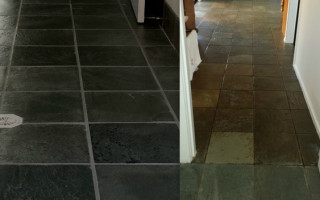 All GroutPro Specialists Australia Wide are fully aware of their obligations to prevent the virus spreading. Our Specialists will all perform a periodic self-assessment of their own condition and will not attend your home or workplace if feeling unwell or think they may have had contact with an infected person. If one of our Specialists attends your location you can be assured they have taken all precautions specified by Federal and State governments.

We take the health and wellbeing of our customers and community very seriously and are here to help keep your environment safe. Our Sanitisation and Hygiene Cleaning processes are extremely effective in removal of Pathogens such as viruses and bacteria. We recommend use of our Hygiene Deep Cleaning services in bathrooms, kitchens and any other hard surface you have concerns about. The Sanitizing solution used by all our Specialists is a hospital grade sanitiser approved for use in hospitals and other medical facilities. Talk to our Specialists about Sanitising your home and workplace.